Between the 18th and 19th of January 2018 Erdogan’s regime officially launched its military operation (called Olive Branch) to invade the northwestern parts of Syria (Aleppo Governorate).  According to statements by the Turkish government, high-ranking army officials and government-related media, the aim of the operation is to liberate the population of these areas from the repression of oppressive political organizations. Behind the spurious and deceitful reasoning lies the ruling (AKP) party’s own interest of intimidating political opponents, subduing them by using mere force and solidifying its position within domestic politics (see the undermining of the continuation of peace talks with the PKK – Kurdistan Workers Party –, or the ongoing repression of members of HDP, the pro-minority rights party etc.)

Erdogan’s regime claims that the main political organizations of the Democratic Federation of Northern Syria, which are struggling to build a new political system based on elements of direct democracy and a social economy, are directly linked to the PKK which in Turkey is considered to be a terrorist organization. The leftist political representation of northern Syrian Kurds, their delegation assemblies, their military alliance – the SDF which comprises Kurdish, Assyrian and Arab units – are willingly confused by Turkish authorities with terrorist organizations currently active in Syria (like ISIL, or Tahrir al-Sham). The regime’s intentions are crystal clear: the so-called „Olive Branch” operation is an unscrupulous and murderous governmental tool that is meant to destroy the nascent democratic political system of the region, the nation-state’s biggest opponent and fear, which is the democratic confederation. There are no guarantees regarding the future of the political organizations of the federation (PYD, SDF, Tev-Dem, etc.), but the present system with its communal assemblies and the municipalist practices of its urban settlements is the only one that has proved able of building something innovative and progressive in spirit within a state of war and amidst authoritarian regimes –  regarding the relentless endeavor of the people who toil to consolidate their new system, we take the following positions:

The signatories of this statement express their solidarity with the inhabitants, victims and with those who are resisting within the areas under siege, Afrin, Sehba and Manbij, and with the masses of the internally displaced and refugees. 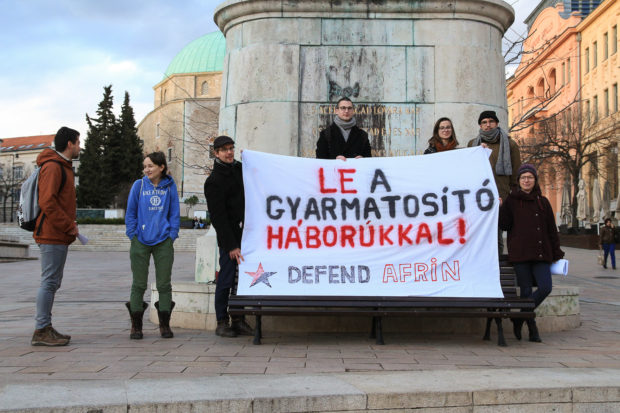