Essential Strike Manifesto for the 8th of March

We are the women who are essential for the healing of the entire world from the pandemic. We are doing essential work and yet we find ourselves in miserable conditions: our work is underpaid and undervalued; we are overworked or jobless; we are forced to live in overcrowded places and to constantly renew our residence permits. We face a daily struggle against male violence, at home and in our workplaces. We are fed up with these violent and exploitative conditions and refuse to remain silent! We started organizing together in a network that connects struggling women, migrants and workers in Central, Eastern and Western Europe: this is Essential Autonomous Struggles Transnational (EAST). On the 8th of March we call all who struggle against capitalist, patriarchal and racist violence to join our strike!.

On the 8th of March we strike against the exploitation of our productive and reproductive labor. With our essential work as nurses, cleaners, teachers, grocery store workers, logistic and seasonal workers, paid and unpaid domestic workers and caregivers for kids, elderly and sick people, we keep society afloat. Especially with schools and kindergartens closed, the burden of childcare and domestic work is on our shoulders. During the pandemic many of us have lost their jobs among others because at home we had children to take care of and domestic work to do. Our work is essential, at home and in the workplaces, and yet degraded.

On the 8th of March we strike against the tightening of patriarchal violence! National governments are using the pandemic as a chance to strengthen the grip of patriarchy: in Poland, with the attempt to further limit freedom of abortion; in Turkey, with the proposal to withdraw from the Istanbul convention; in Hungary, with the restrictions of transgender rights and an anti-LGBTQ agenda. While we were told to “stay home, stay safe”, many of us don’t have homes at all. And for many others their homes are everything but a safe space as they live with abusive partners and struggle against increased domestic violence during the lockdowns. An open attack has been waged to make us stick to the role of serfs of society, subordinate at home and exploited in the outside world.

On the 8th of March we strike against the racist and exploitative regimes of mobility! As care and seasonal migrant workers from Eastern Europe, we have been “allowed” to reach Western countries to perform essential labor here, but we had to do so at our own risk, with no protections or social security. Our work sustains (health)care in the West, while in the East, the healthcare systems are collapsing on the shoulders of overworked and under equipped workers. Migrants and refugees from within and outside of the EU are left living in overcrowded dormitories, camps and working in unsafe environments, while they are never entitled to the same monetary aid that local populations are given. On the unequally divided map of Europe, migrants are paying the highest price of the pandemic, as they usually pay the highest price of exploitation.

We refuse to be considered essential only to be exploited and oppressed! Inspired by former and ongoing struggles, we build on the experiences of the global women’s strike, the Polish women’s strike and the feminist struggles in Argentina for the right to abortion. We look up to the protests and strikes of nurses, doctors, (child)care workers, logistic and seasonal workers in Bulgaria, Georgia, Austria, Romania, the UK, Spain, Italy, Germany and France. We learn from the struggle against the Romanian law banning the discussion of ‘gender’ in education, the migrants’ transnational mobilizations and the demonstrations for black lives. Building on these collective experiences of struggle and their power to challenge the status quo, we call women, workers, migrants and LGBTQI+ people to join us in an essential strike on the 8th of March. Our strike strives to disrupt the current conditions of our oppression and claim us a voice in the conditions of the reconstruction. With our strike we fight for the following demands:

Freedom from patriarchal violence in all its forms! We see violence against women not as an isolated event, but as part of the whole patriarchal system that wants to make us stick to the role of caregivers. We refuse to bear the burden of essential work imposed on us through violence and harassment. We oppose the attacks of ultra-conservative governments and demand safe, legal and free abortion and contraception in every country. We demand an immediate stop of the political and legislative attacks on LGBTQI+ communities.

Higher wages for all! Our feminist struggle over wages is not simply against the gender pay gap, but against the capitalist conditions which produce and reproduce so many more wage hierarchies between genders and ethnicities, nationalities and whole regions. While the rich have sought the pandemic as an opportunity to amass more wealth, we are left behind to bear the burden of austerity. Enough! We do not simply claim wage equality of the genders, but higher wages for all workers! We demand the transnational redistribution of wealth! Let’s start taking back what is ours!

Well-funded and inclusive welfare transnationally! We refuse reconstruction plans that continue off-loading the costs of decades-long welfare cutbacks on women and migrants. We want to create transnational connections between struggles for welfare, aids and social security. Even though welfare conditions differ from country to country, they are based on the sexist and racist division of labour and wage differences that create hierarchies between women of different nationalities. We want to turn these hierarchies into a common fight against patriarchal welfare transnationally!

Unconditional European residence permit for all migrants, refugees and asylum seekers! We reject the way governments and bosses blackmail migrants by imposing impossible economic and institutional requirements necessary to obtain and renew residence permits. This forces migrants, especially from outside the EU, into otherwise unacceptable working conditions.

Safe and better housing for all! By March 2020, we were already in a deep housing crisis. Throughout the pandemic our homes have become politicized even more so beyond our agency and consent! We demand adequate and financially accessible housing for all, free from overcrowding and precarious conditions! We call for the immediate rehousing of persons that went through domestic violence!

With our essential strike we want to show that our lives and our struggles are essential! Therefore, we need to join forces across the borders. On the 8th of March we want to call everyone to make visible the force of essential labour and use it as a weapon to impose our terms for the post-pandemic reconstruction!

We call on everyone to organize strikes in the workplaces and outside of them, demonstrations, marches, assemblies, flashmobs, symbolic actions, pañuelazos, ruidazos! Let’s push unions to support the women strike! Let’s imagine together the ways to make our different struggles visible and connect them across borders.

We call all women, migrants and workers who share our vision and demands to join us for a public assembly on the 21st of February where we will discuss the horizons of our essential strike!

We invite everyone, who identifies with this manifesto to sign it, share it widely or translate it to their language so that it can reach more women, migrants and workers.

Sign the manifesto here: https://forms.gle/zpNnciKrGZikBHB79
To see the list of signatures, check out the English version of the text on the website of Transnational Social Strike here. From there you can access even more translations as well.

Stay in touch with us on Facebook (EAST – Essential Autonomous Struggles Transnational) or by email at essentialstruggles@gmail.com. 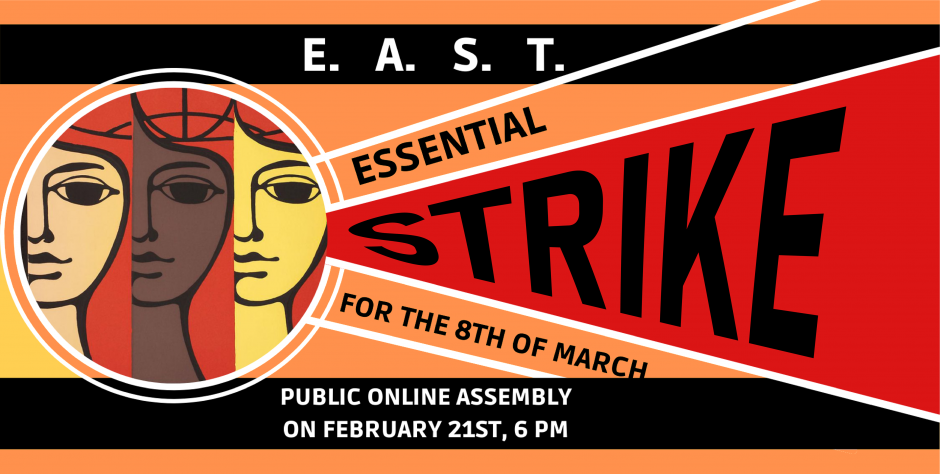 We borrowed the title of our feminist translation series – Your silence will not protect you – from Audre Lorde, Black American lesbian feminist author. In the series we publish the Hungarian translations of international and Romanian intersectional anti-racist and anti-capitalist feminist essays, analyses  and manifestos, which instead of complicit silence, are meant to catalyze listening, communication and raising our voice.

Editura Pagini Libere (Free Pages), a Romanian non-hierarchical, decentralized and autonomous publishing collective prepares brochures for the texts of the series, which you can either download as a pdf or read online (see below):